We are at the end of an era, in a much grander scale than you’re probably imagining.

As I often do, I dove deep into a Wait But Why article. They usually take me an hour or so, but this one–about what Elon Musk is building with Neuralink, and more importantly, why–took me three hours. Everything Tim Urban writes is insightful, but this one changed the way I see the future. It hit me so hard that I decided to distill the post’s 38,000 words into about 3,800–still quite a read–but well worth it. I still recommend the full piece with funny illustrations only Tim can offer, but if you’re pressed for time, I hope you find this summary eye-opening.

We’ll start with the basics, with the foundational elements of this piece touching on the way human knowledge grows, the way we communicate, and the tools we use for doing so. Next, we’ll cover how progress happens, how Elon Musk builds companies, and examine where those things merge today around brain technology.

That’s where the fun begins. We’ll get into both fun and scary applications of it that are likely to be ubiquitous within the next few decades, and uncover a potential threat that we probably aren’t taking seriously enough. And finally, we’ll conclude with how Neuralink, and in fact all of Elon’s (pre-Twitter) companies, are really about helping maximize humanity’s prospects for a bright future.

Let’s dig into it.

1A) The way knowledge grows

1B) The way we communicate

All good so far? Good. Now we will start stacking concepts onto these foundations to build a deeper understanding.

2A) How progress happens

2B) How Elon Musk builds companies

(Important note: this article was written about Elon’s companies in 2017–so let’s temporarily forget the ongoing Twitter fiasco and his fraught 2022 and focus on his virtues as a visionary. The key takeaways still apply). 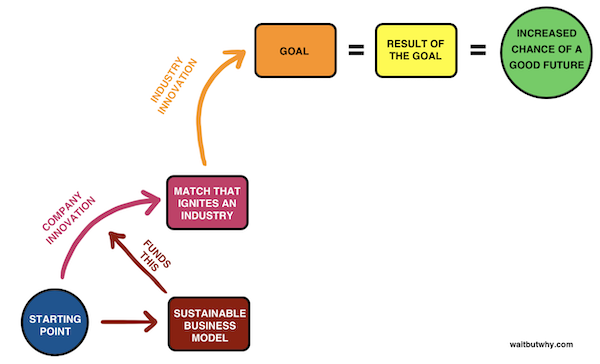 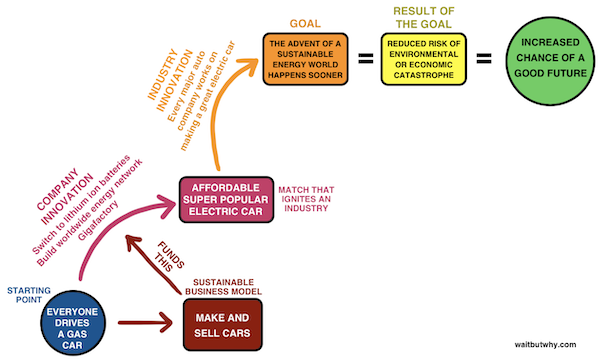 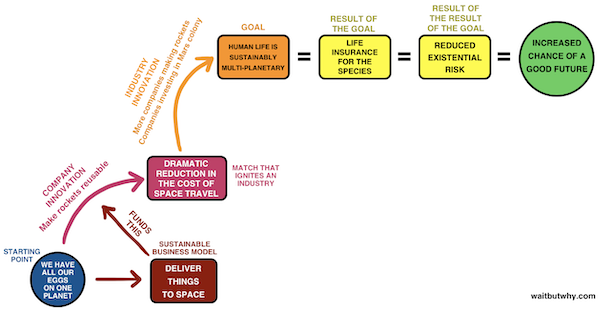 2C) Where we are today and (immediate) tomorrow

Still with me? Now let’s get to the mind-bending, sometimes fun, sometimes terrifying stuff. In the very near future, we will essentially be able to use our thoughts as a remote control (a company called BrainGate is already enabling paralyzed patients to control a cursor, or even play a video game, with their thoughts).

3A) Here are some super fun applications that are pretty hard to fathom today.

3B) New technology always comes with real dangers and harms a lot of people.

3C) But, we are vastly underestimating the threat the Human Colossus is creating toward itself with Artificial Intelligence.

To wrap this up, let’s put it all into perspective. We are currently on the edge of more history timeline boundaries than just the transition into digitally communicating brains outlined in (1B). After 1,000 centuries of human life, this century will be the one where we become multi-planetary, and the one where we manage to wrestle genetic code from the forces of evolution so it can reprogram itself. People living today may actually witness the moment biotechnology frees the human lifespan from the will of nature (our physical body decomposition). Quite simply, we’ve built an entirely new level of power–powerful enough to overthrow Earth’s 3.8 billion-year history.

This puts us on a superhighway towards unimaginable change whether we like it or not, and generations alive today, whether they realize it or not, are the first in history to face real existential risk. But these generations could also be the first with an actually realistic hope of a genuinely utopian future. We need to quickly figure out what the “unimaginable” is, and that’s where Elon Musk comes back into play. Which of these outcomes we’re headed for is not at the whim of chance, but at the whim of the Human Colossus, and depends on what we do over the next 150 years, or maybe just the next 25 years.

4A) Elon is all about trying to prepare us for that “unimaginable,” regardless of what it turns out to be.

4B) This “needs of the masses” sounds a lot like democracy, by definition.

4C) Neuralink is, like Tesla and SpaceX, ultimately about increasing our chances for a better future.

I hope that gave you something to wrap your head around. I’ll let Tim bring it home:

The reality is that we’re whizzing down a very intense road to a very intense place, and no one knows what it’ll be like when we get there. A lot of people find it scary to think about, but I think it’s exciting. Because of when we happened to be born, instead of just living in a normal world like normal people, we’re living inside of a thriller movie. Some people take this information and decide to be like Elon, doing whatever they can to help the movie have a happy ending—and thank god they do. Because I’d rather just be a gawking member of the audience, watching the movie from the edge of my seat and rooting for the good guys.

Wizard Hats & Our Mind-Bending Future: (Summary of *Wait But Why* Neuralink Post)

Previous: FTX & My Super Mario Life
Next: O’Hare Arrivals Hell (& How to Fix It)