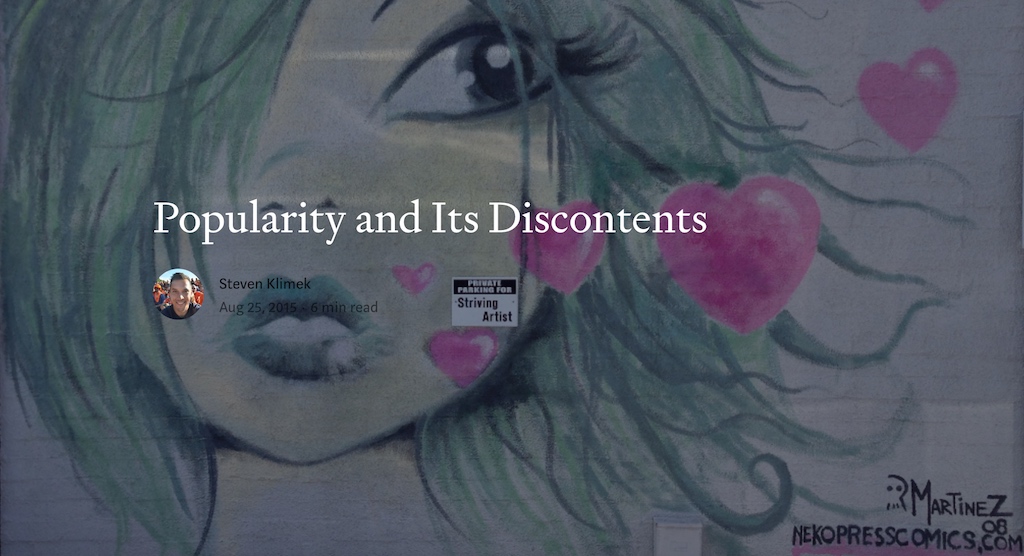 I am not trying to create the next Facebook.

Yet I continue to toil away on a social journaling project of my own, Sideview, because I’m tired of stimulation. It’s all around me. All the time.

I need some time to reflect.

The new Virtual Economy is built on two things: attention — or more accurately, a collective lack thereof — and dopamine. Attention being the fight for eyeballs in the rugby scrum of online advertisers, and dopamine being the intermittent reward we get for doing the right thing.

The fight for attention is not new to social media (check out an episode of AMC’s Mad Men if you need a refresher). The alarming difference of the social era, though, is that we can’t tune it out. In the past, television, newspapers and magazines were opt-in entertainment. Maybe we couldn’t avoid that billboard on the side of the freeway on our morning commute, but that was manageable.

But today, our phones are our lifelines. They serve as entertainment, sure, but more importantly they are how we communicate with loved ones, how we work, hell…how we even get to work. And with mobile advertising already approaching $28 billion annually, and projected to be nearly three-fourths of global advertising spend within just four years, we simply can’t avoid it.

Business is not charity, and advertising is not evil. But if the fight for attention is a scrum, the behavior therein has become outright hooliganism.

Think about this term for a moment: social media strategy. This makes me laugh, and the fact that I’m the only one laughing illustrates my point perfectly. The term has become so mainstream that it has spawned an entire industry. Can you imagine there being, 20 years ago, an industry built around how to talk on the phone? Social media is a channel (or rather, a series of channels), not an end product in itself. At its best, it’s free and unfiltered — not something to be strategized.

Yet, strategy not only exists, but has become essential. Because what you have to say only matters if you win. The infrastructure has turned human expression into a competition.

It’s pressure from both ends. Since upvotes, likes and hearts have become a fixture of our social lives, we need to see how many people like what we have to express. And since this popularity system itself then dictates what content we see, it’s easy to understand how really motivated people (along with advertisers) have become savvy at manipulating the popularity system to make their mark.

I often joke with friends that I’m tempted to go to a popular park on a Saturday and rate each person that walks by, NBA Slam Dunk Contest style. Literally, hold up a cardboard sign with a number on it:

Of course I get told off that this would be a terrible thing to do (and don’t worry, I recognize this myself), yet this is exactly what social media has become akin to.

It’s a cycle. I post something, and likes exist, so I want them. I see what kinds of posts get liked, and emulate those. I get more likes. As I get more likes, I’m showcased to more people, and become even more popular. At the highest levels, I may even be deemed by some company like Klout as an “influencer”, which means I can now get paid for posting what someone else tells me to.

Except, when it isn’t. What about when I don’t get liked? I know those hearts exist, remember, so I want them. Except I’m new to this. I don’t know how to use trending topics to my advantage. I’m not that interested in regurgitating someone else’s ideas. I don’t like #TeamFollowBack; I’m loyal to the Cubs. But maybe my next post will be the one that everyone likes. So I push forward.

For what? What do I get out of that way of thinking? Can’t I find my happiness in some other way than a virtual dopamine kick? I love aspirin when I have a headache, but I don’t want to be dependent on it to survive.

This is why Sideview is happening. I simply want to create an outlet for people to express themselves without pressure to be popular, to be liked, or to be important. Because I truly believe that if you change the infrastructure, you can change how people create and consume content. When it’s no longer about offering an immediate, finger-based opinion, maybe we’ll stop just a second longer and think about what we’re seeing and what we’re sharing. What it all means. How we can relate to it.

It’s not that there’s a problem with Facebook or Instagram. As I said at the beginning of this piece, I love them. Both are remarkable examples of creating value from nothing — more than a billion people can’t be fooled. They signed up because they get real value. But when I hear stories about teenagers making fun of others because of the number of Snapchat followers they have, or kids measuring their self-worth in likes and hearts, it makes me pause. And quite frankly, I think Facebook and Instagram could still be successful without popularity metrics.

So I don’t want to share things anymore hoping for a reaction. I don’t want to miss half of what I’m experiencing live so I can share it to gain virtual popularity. Instead, I want to capture and share what matters to me, without concern for what anyone else will think.

If any of this resonates with you, please check out Sideview. We have a beta version available for iOS, and while it is a work in progress, we’re humbly hoping for feedback from people like you to turn it into something useful. Something a bit less stimulating and more meaningful instead. Maybe, after all, that’s how you create stimulation that actually lasts.

Gosh, I hope somebody likes this.

Popularity and Its Discontents